Steve loved mixing his music with exercise and hated how they mixed their music with his exercise.

I didn’t know Erik, I think I emailed him once, but maybe it was someone else in Hans Condor. They were a Nashville band that gloriously went on a Japan tour, and leave behind a great album and at least one terrific video.

So this isn’t a personal reminiscence.

But a lot of Nashville loved Erik. Reading the remarks would be emotional (a young person dies) but his generosity is legend.

Frank created a book of photographs called The Americans back in the 50s. It’s a terrific book of strikingly straightforward and revealing images full of, um, Americans. Jack Kerouac wrote the introduction to The Americans, an obvious choice at the moment On the Road ruled the world. Kerouac also wrote and narrated Frank’s first film, a shambling tale of New York City’s bohemian lives, called Pull My Daisy. You can view it here. Frank, of course, took the photos that made up the collagey cover of the Rolling Stones Exile on Main Street. Frank also made a tour documentary with the Stones at about the same time. It is called Cocksucker Blues and the Stones, who have said they thought the film was excellent, sued to keep it from being released because its explicit sex and drug scenes were too much even for them. A deal was reached that allowed Frank to show the movie five times a year provided he was in attendance. I remember one year leaving the Rolling Stone magazine Christmas party early to see the film at the Anthology Film Archives on the Lower East Side of Manhattan. You can find the film in pieces on You Tube, from time to time. Frank clearly wasn’t policing the copyright, nor were the Stones, as evidenced by this music video that uses some of the film. Frank also made some dramatic films that drew notice, though the only one I saw was a shambling road picture featuring a who’s who of cool rock dudes in the late 80s (I’m talking guys named Johansen, Waits and Strummer, plus Leon Redbone). This seems to be the whole film with German titles. Final bonus video with Frank’s Super 8 film of the Stones.

This has a great chorus, fantastic guitars, massive scale in a simple song about, who knows? From No. 5.

I think we may have posted this clip before, but maybe not. It is great.

NOTE: Steve Moyer’s friends in the fantasy and baseball industries have begun a GoFundMe to help support his daughters, Harmony and Mary, who face college and adulthood without their pop. Please feel free to donate in honor of our friend. The link is GoFundMe Steve Moyer kid fund.

I have been trying to get my head around our friend and colleague Steve Moyer’s untimely passing last Thursday.

If you have followed my ramblings over the years, you know I have had a number of brushes with death myself, and that my own wife, child, and dog all left this plane within a year of one another between July of 2005 and April of 2006. 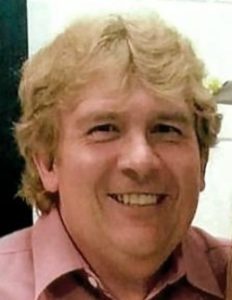 What these rather intense experiences seem to have made me, however, created a sort of paradox. On one hand, I accept the inevitability of our own human experience, understanding our time here is indeed finite and that there is no fairness within the amount of time we are granted here on earth.

Similarly, I can put it in a sort of detached-automatic mode, for lack of better verbiage, making certain the trash is taken out, that dinner is made, and that the appropriate persons are advised appropriately of the departure.

Certainly, Steve was core to a lot of the fantasy industry, and having been colleagues for a quarter century I seem to be one of those who knew him the longest, and perhaps as well as anyone within our circle.

Still, it never occurred to me that Steve — hell, that any of us — would leave untimely, so soon. Further, I have had enough head butts with Steve that I was surprised to find myself at the center of coordinating updates about him, being the source for articles and news as well as disseminating funeral information.

I know I am not alone in banging egos with Steve, for as his fiance, Samantha Drennan — with whom I have unfortunately become friends under the worst of circumstances — acknowledged that Steve “argued with everyone about everything.” So I was happy Steve and I had a good clearing of the air last First Pitch, Arizona.

Furthermore, I was glad to help out during the couple of days subsequent to learning of Steve’s passing by sharing information and emailing so many who knew and cared about him. I helped my mate, Roto Expert’s Scott Engel gather information both for an article about Steve, and together we plotted a Hall of Fame Hour — one of the shows Scott hosts on FNTSY— on  Steve this coming Monday (listen from 7-8 PM, ET). I posted and commented on the Rock Remnants site that was Steve’s imagination, where Peter Kreutzer, Gene McCaffrey, and I made a musical home for our writing outside of fantasy sports.

The bulk of these activities occurred while I was still at spring training, usually one of my favorite trips of the year. For, in March, baseball is still fresh and optimistic, players are happy and mostly healthy, and drafts are gearing up.

Instead, within the throes of my “busy-ness” handling Steve things, I felt distracted. I was  disinterested in going to games and drafting and interviewing players. And, the truth was, I just wanted to go home and be with my family.

I did keep wondering, however: Why I was so ambivalent with respect to something I really enjoy?

Then it occurred to me that I was subconsciously being so busy detaching that I did not have to acknowledge how bummed I am. In discussions with several of the groups and leagues in which Steve and I both participate, I realized what an integral part of my life Steve was, and I guess vice versa.

And, that meant the bummed disinterested feelings I was trying to ignore were actually grief.

Life is such a silly ephemeral thing. So difficult to understand, let alone make reasonable. And yet it is wondrous and beautiful, for though in the end it takes us from one another, certainly prior to that life gives us the gift of one another.

It certainly is a shame, however, that we have forget to embrace this gift until that appreciation is no longer corporeal.

One of the bands that Steve and I shared a love for was the Small Faces, and perhaps their best-known song was “Itchycoo Park.” As a dog owner, and husband of an animal lover, I like to imagine The Rainbow Bridge in a sort of “Itchycoo Park” sense.

I hope I am right. I hope Steve is rocking out there, maybe with my son Joey and late wife Cathy, and our dogs Macaroni, Onyx, Jazzmine, and Mahina looking on. Miss ya Steve.

Tune into the Tout Wars Hour on the FNTSY network, hosted by me, with Justin Mason and featuring Lord Z every Sunday, 2-4 PM ET/11 AM-1 PM PT, and you can follow me @lawrmichaels.

I bought an album by German band Kadavar a couple years ago and liked it OK, but I found it a little too straight Sabbath rippy to hold my interest for more than a couple listens.

Classic Rock magazine told me tonight that their new album, Rough Times, is uncharted territory for them. This song has perhaps just enough pop sensibility to make the whole thing work better. I’m gonna give Rough Times a try.

The drummer’s eyes, the singer’s teeth, the hairbrush at the end. Intriguing!!!

You know how you’re going from place to place on the internet, and then you end up someplace and you have no idea how you got there? Tonight that happened to me, when I landed at clubdevo.com.

Devo would seem to be an internet savvy band, all techno and futuristic, even if that represents the devolution of humankind. But clubdevo.com is a wasteland. Only the Twitter feed is alive with content. You can check in here: http://www.clubdevo.com/

But better to check this:

Facebook friend Darren Viola posted some Christgau clips of 1977 live show previews of the B-52s and Fleshtones shows at Max’s, which are fun, but down in the comments was a link to this tune from 1980.

I didn’t know this one, which is great fun.

Listening to the whole album. Good!